I have slowly been acquiring Turn A Gundam scripts that I happen to run across in my auction searches. Recently I obtained the script to episode #48 – “The Return of Dianna”. It’s noted as episode #47 because the re-cap episode (#16) doesn’t appear to be counted in the broadcast number. See past the break below to read more. 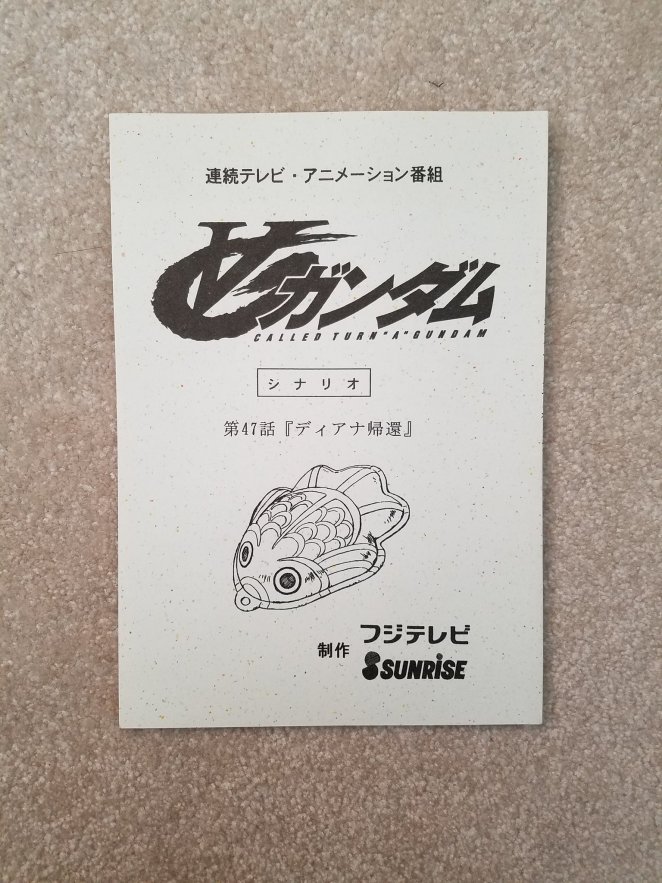 This episode’s script is by Jiro Takayama of Slayers fame. I actually haven’t watched Slayers as of this writing (I really should…) so I’m not too familiar with the name. A cursory search indicates that he was intimately involved in the series’ scenario and composition. Interestingly enough, Takayama would go on to continue working with Tomino on King Gainer and The Wings of Rean.

These pamphlets were distributed to the voice actors and actresses in the recording studio. It contains the episode’s dialogue, as well as character and setting information pertaining to the story at its current place.

By episode #48, the story is nearing conclusion and the final conflict is about to begin. Corin Nander, who’s been elusively in-and-out of the plot, rejoins the fray and teams up with the cast of heroes. Corin’s a character who’s intentionally mysterious and vaguely-defined, but this episode sheds more light onto his implied backstory: that he’s been alive for thousands of years and remembers the “Dark History” of old. The effects of cold sleep have impacted and altered his mental state of being.

In this episode, Dianna also ceremoniously returns to the Dianna Counter and vows to take charge in the battle against Gym. Dianna’s a character who commands respect simply for being who she is, but she isn’t always an effectual leader. Throughout the events of Turn A, she gains and regains that respect and admiration from her people. This is the culmination of that, as on the brink of despair and confusion, they welcome her return.

View all posts by Feez